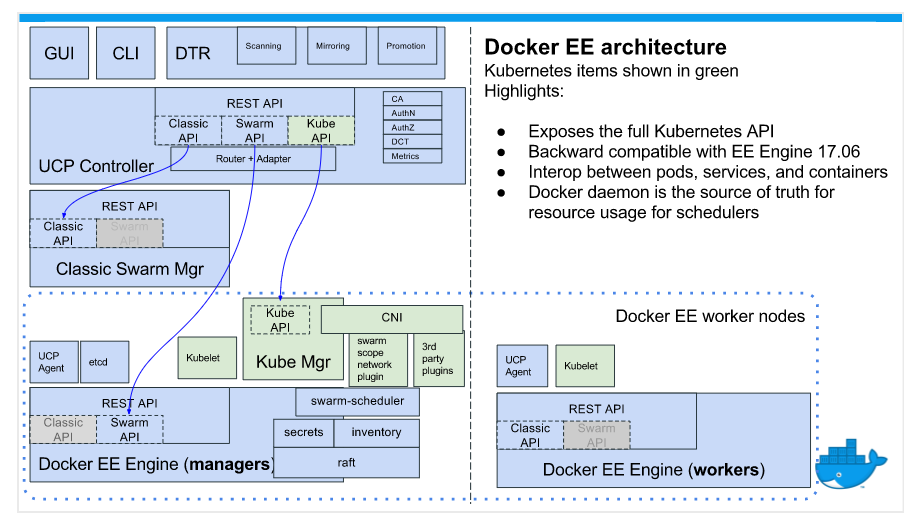 Deploys applications from images, by managing orchestrators, like Kubernetes and Swarm. UCP is designed for high availability (HA). You can join multiple UCP manager nodes to the cluster, and if one manager node fails, another takes its place automatically without impact to the cluster.

The commercially supported Docker engine for creating images and running them in Docker containers.

Kubernetes features on Docker EE include: 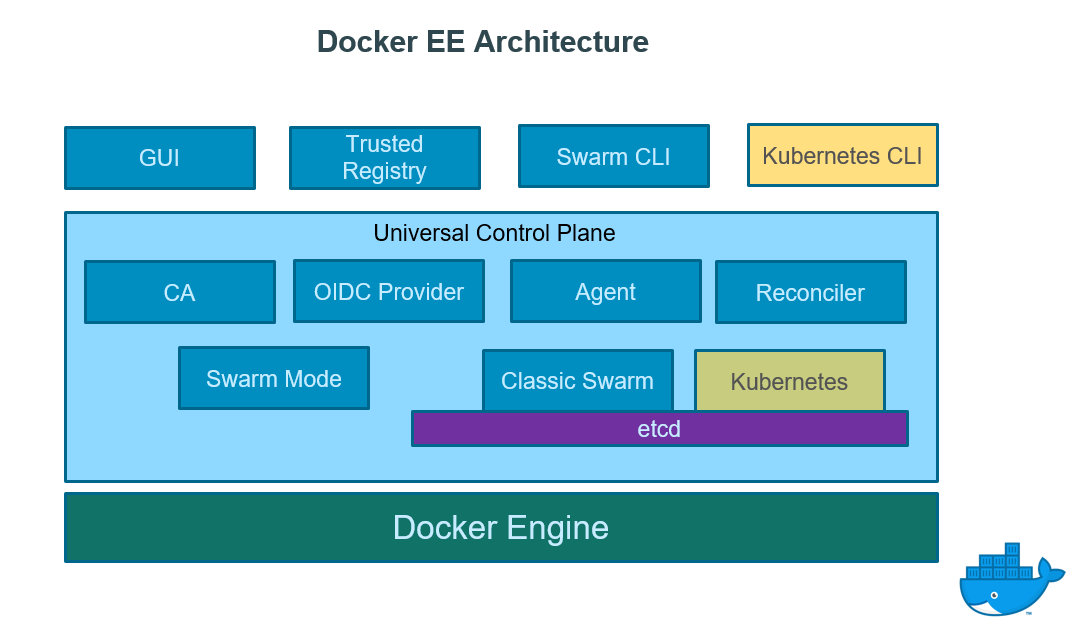 At the base of the architecture, we have Docker Enterprise Engine. All the nodes in the cluster runs Docker Enterprise Edition as the base engine. Currently the stable release is 17.06 EE. It is a lightweight and powerful containerization technology combined with a work flow for building and containerizing your applications.

Sitting on top of the Docker Engine is what we call “Enterprise Edition Stack” where all of these components run as containers(shown below in the picture), except Swarm Mode. Swarm Mode is integrated into Docker Engine and you can turn it on/off based on your choice.Swarm Mode is enabled when Universal Control Plane (UCP) is up & running.

In case you’re new to UCP, Docker Universal Control Plane is a solution designed to deploy, manage and scale Dockerized applications and infrastructure. As a Docker native solution, full support for the Docker API ensures seamless transition of your app from development to test to production – no code changes required, support for the Docker tool-set and compatibility with the Docker ecosystem.

There are 3 orchestrators sitting on top of Docker Enterprise Engine – Docker Swarm Mode, Classic Swarm & Kubernetes. For both Classic Swarm and Kubernetes, there is the same underlying etcd instance which is highly available based on setup you have in your cluster. 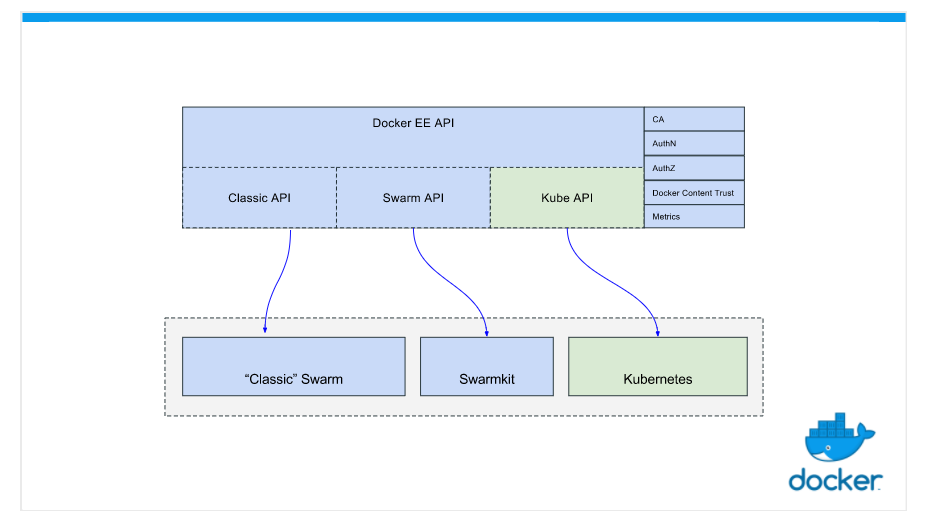 To manage lifecycle of orchestrator, we have a component called Agents and reconciler which manages both the promotion and demotion flows as well as certification renewal rotation and deal with patching and upgrading.

Agent is the core component of UCP and is a globally-scheduled service. When you install UCP on a node, or join a node to a swarm that’s being managed by UCP, the agent service starts running on that node. Once this service is running, it deploys containers with other UCP components, and it ensures they keep running. The UCP components that are deployed on a node depend on whether the node is a manager or a worker. In nutshell, it monitors the node and ensures the right UCP services are running.

In order to integrate with K8s and support authentication, Docker Team built open ID connect provider. In case you’re completely new to OIDC, OpenID Connect is a simple identity layer on top of the OAuth 2.0 protocol. It allows Clients to verify the identity of the End-User based on the authentication performed by an Authorization Server, as well as to obtain basic profile information about the End-User in an inter-operable and REST-like manner.

Sitting on the top of the stack, there is GUI which uses Swarm APIs and Kubernetes APIs. Right next to GUI, we have Docker Trusted Registry which is an enterprise-ready on-premises service for storing, distributing and securing images. It gives enterprises the ability to ensure secure collaboration between developers and sysadmins to build, ship and run applications. Finally we have Docker & Kubernetes CLI capability integrated. Please note that this uses un-modified version of Kubernetes API.